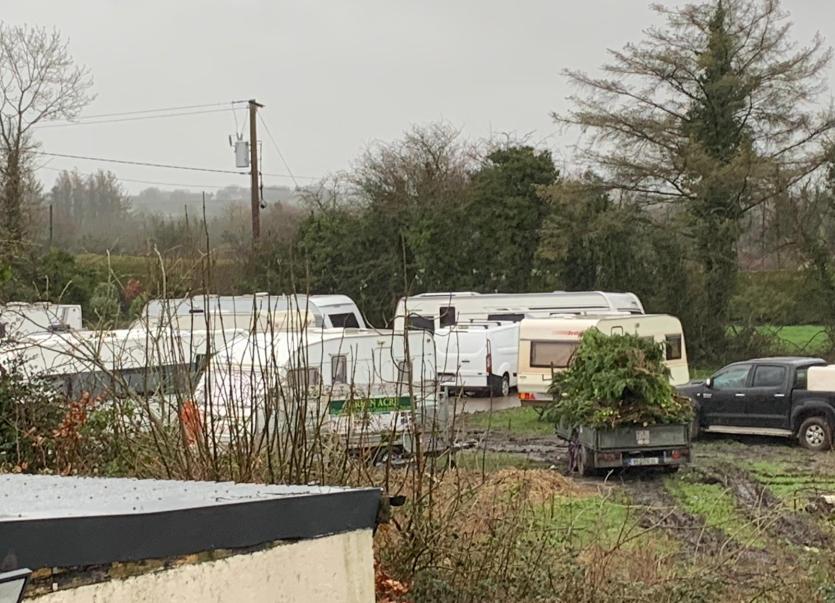 Mountrath people have been described as being put "under siege" after many caravans began arriving to park in a privately owned site ten days ago.

Over a dozen caravans have gathered on the site which is on Shannon Street in Mountrath, with more reportedly still arriving up to Monday, January 27.

Shops and pubs are closing their doors, two local councillors have claimed at a Council meeting.

Cllr James Kelly says the gathering on a private owned site on Shannon Street is "breaking all the planning laws".

He described the situation at the Council meeting on Monday, January 27.

"They are breaking all the planning laws. There are five generators going day and night. There are sanitation issues. There are parties going on until three or four in the morning," Cllr Kelly said.

He described the effect on local people.

"There is no respect for people. Business and pubs have closed their doors. These people are under siege.

He has thanked Laois County Council for already issuing a planning enforcement notice to the site owner.

"The process is going to take a long time. The Gardaí are involved," he said.

"It is very sad. Driving through the town of Mountrath you can see doors closed where people can’t go out and socialise. It’s very unfair.

"The Council has acted in getting an enforcement order, but this can take a long time.

"The noise level is terrible, the sanitation is terrible. To have elderly people say to you that they are afraid to walk down the road," he said.

Cllr Conor Bergin fears a fire risk on the site.

"There are a large number of caravans with generators, we all remember Carrickmines. We don't want another disaster in Laois," he said

He explained what the council is planning to do.

"We did act very quickly in issuing an enforcement notice last Monday. The subject has two weeks to reply so that is next Monday February 3," he said.

"If there is no engagement, the next step is to act on its conditions. If there is no co-operation that involves going into the circuit court and that depends on when the next sitting is and having our case ready.

"We will be following this up in any other avenue we have as a local authority," he said.

Cllr Kelly said he is concerned at the length of time the legal process will take.

"My only worry is this is going to be a slow tough process for everyone involved. I’ve got missed calls from people because there are more caravans going on site at the moment. People are very worried," Cllr Kelly said.