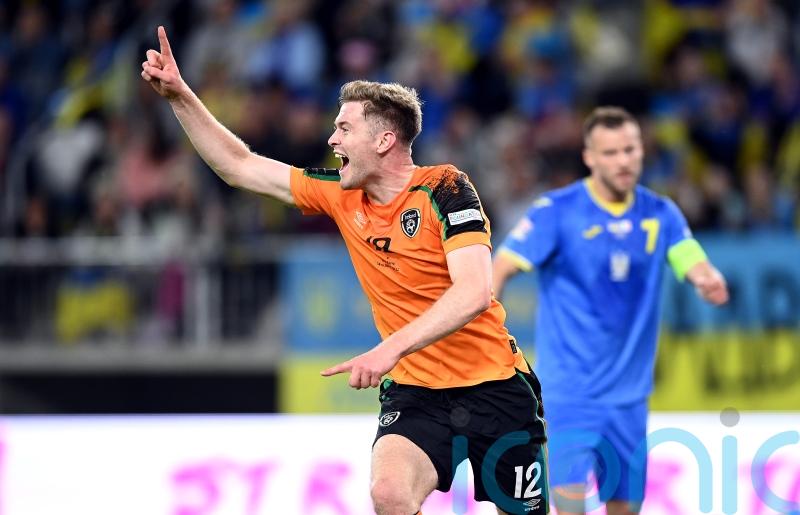 Republic of Ireland defender Nathan Collins left Lodz with his only regret that his stunning solo goal could not secure a Nations League win against Ukraine.

Republic of Ireland defender Nathan Collins left Lodz with his only regret that his stunning solo goal could not secure a Nations League win against Ukraine.

The Burnley centre-half scythed his way through the Ukrainian defence, evading three challenges before stabbing home with the outside of his right foot to give Ireland a first-half lead which was cancelled out by Artem Dovbyk after the restart.

Asked about his remarkable strike afterwards, Collins told RTE: “If it was the last minute, it would be great because we could have got the win.

“But I’d have taken a draw. They’re a good team and we know where we are as a team as well.”

Encouraged to talk about the mazy run which took him past Oleksandr Zinchenko, Serhiy Sydorchuk and Illia Zabarnyi, Collins added: “I haven’t watched it back yet. I need time to watch it back, to have a look at it.

“I just took it in the moment, I took it in my stride and I saw what was open and I took it.”

Ireland boss Stephen Kenny was thrilled with Collins’ contribution not only in Poland, but in all four games during the window.

Speaking at his post-match press conference, Kenny said: “Nathan has established himself, he’s caught the imagination. The four games he’s played, he’s been really exceptional in all four games. His decision-making for one so young is excellent and obviously he’s got a lot of very good attributes and you feel that he’s improving all the time.

Opposite number Oleksandr Petrakov was less impressed, although preferred to keep his own counsel.

Petrakov said: “Of course I was really upset because a central defender scored the goal. I never give my opinion after the game, I have to sleep on it, think about it and the next day, I will tell my team what I think about it.”

Ukraine top League B Group 1 with seven points, while Ireland sit in third place having taken four of the last six points available after losing their opening two fixtures.

Kenny said: “I’d have preferred a higher points total. If we’d have won today… I definitely would have.

“But I thought it was very harsh to lose the opening two games, to be honest. To have no points from that was very difficult to take because we hardly conceded a chance in either game.

“Today was a good platform to go and play and we played well – but I want us to be even better than that, I want us to improve again. I think we’re capable of even getting better and the capacity there for improvement is high. I think we can even get better.