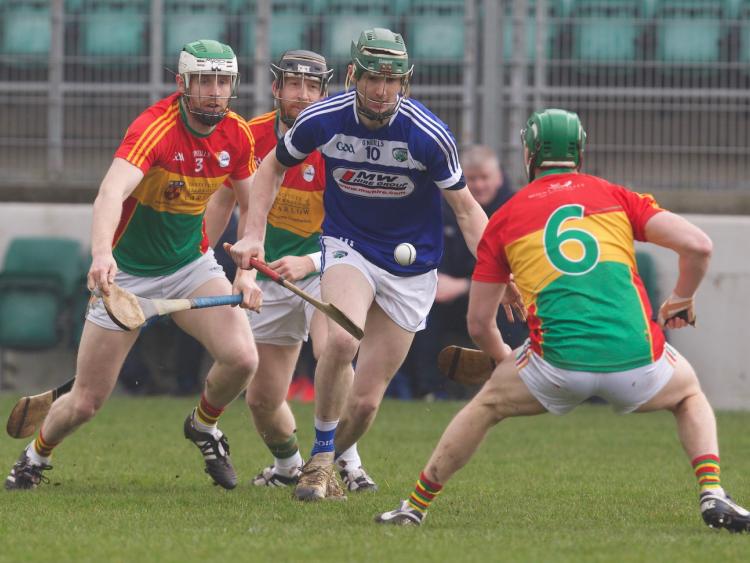 Aaron Dunphy on the attack for Laois PIC: Alf Harvey

A late, late free from Carlow's David English snatched a draw against Laois in this Allianz NHL Division 1B clash in Netwatch Cullen Park.

Having struggled for accuracy in front of goal throughout, Laois rallied late to go ahead in the 72nd minute, but a late Carlow free ensured a share of the spoils.

There was a scrappy start to the game, which set the tone for what proved to be a scrappy first half with neither side really imposing themselves on proceedings.

Carlow eventually opened the scoring in the third minute with a Marty Kavanagh 65, after Enda Rowland made a smart save to deny Ted Joyce.

Rowland then responded for Laois when he launched over a free from his own 45 yard line, but Jack Kavanagh quickly put Carlow back in front.

Again it was Laois who responded, as Sean Downey was fouled and Mark Kavanagh rifled over a 21 yard free. Soon after, good pressure from the Laois forwards earned them a 65, and Kavanagh applied the finish to that too as the visitors went ahead for the first time.

Another Marty Kavanagh free brought Carlow level, before Laois had their best goal chance of the half through Willie Dunphy, but his shot was smothered by a phalanx of Carlow defenders.

The scoring had been tit-for-tat so far, and there was little change to that format for the remainder of the half with neither side capable of putting a run of points together.

If either side should have done it however, it was Laois, as they hit a string of wides late in the half which could have seen them go three or four points ahead.

The teams were deadlocked at 0-7 each after 30 minutes but Laois finally managed to edge ahead in the closing minutes, as Rowland and Kavanagh both landed frees to see them 0-9 to 0-7 ahead at the interval.

Carlow needed to respond early in the second half and they duly did, as some direct running won them two frees, which Marty Kavanagh pointed to bring them level.

It was Laois' turn to respond now, and they duly did as Aaron Dunphy and Rowland (free) restored their two-point lead.

That seemed to light a fire under the home side, and they produced their best hurling of the game after that to build up a four point lead.

John Michael Nolan, Marty Kavanagh (free) and Seamus Murphy (2) swung the momentum back in their favour, and then Edward Byrne and Kavanagh (free) pushed them four clear.

Carlow lost wing-back Richard Coady to a second yellow in that spell, but it was they who reacted best, and Laois looked out of ideas.

To the credit of Eddie Brennan's side, they managed to grind their way into a bit form. Neil Foyle and Mark Kavanagh (free) got them going, and they eventually drew level in the final minute with a point from Cha Dwyer.

They then won a 65 which Mark Kavanagh showed great composure to sail between the posts. That could have been then winner, but David English had the final say as his brilliant late, late free earned his side a share of the spoils.