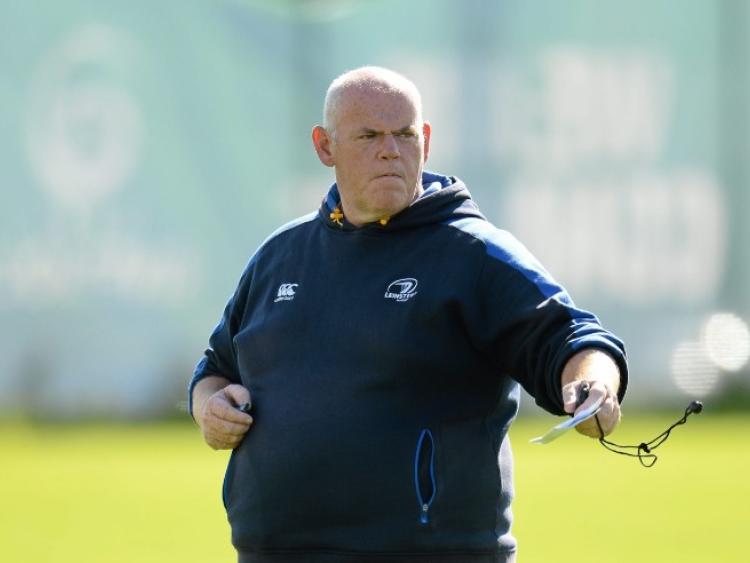 At 4.45am on a cold March morning, Dave Fagan drives from his home in Edenderry to Dublin where he spearheads Leinster Rugby's sub-academy, the breeding ground for top players to be born or broken.

Fagan previously worked in a number of Offaly GAA set-ups, including as part of the management team that brought Offaly to a Leinster final in 2006.

He also spent eight years with the all-conquering Rhode team. Through all that, however, and for the last 23 years, Leinster Rugby has been the day job.

Having worked with the senior team on strength and conditioning, Dave was to the forefront as Leinster's academy and player pathways were formed in 2007 with the sub-academy becoming his full-time job around that time. It has been a daily drive for excellence ever since.

The sub-academy fits beneath the famed Leinster academy in the club's structure and is synonymous with make or break training rituals where crops of school stars and club prospects are blooded for the first time at professional level.

The task of finding those with the attitude to succeed at the home of the European champions is Dave Fagan, a strength and conditioning expert who made Edenderry his home over 20 years ago.

From Jordan Larmour to Tadhg Furlong, Cian Healy and Sean O'Brien, many of Leinster's current stars have passed under his watchful eye.

Without the money to compete with the likes of the French clubs, Dave says this grassroots approach is vitally important to the continued success of club and country.

"The aim of the sub-academy is to bring players up to academy-level. People think it's just our top schools feeding into it but we have five centres throughout the province from which we get underage players," Dave explained.

Examples he gave of the cross-spectrum approach was Michael Milne from Birr who while coming through and impressing at schools level with Cistercian Roscrea, also attended these regional centres for further expertise and guidance from Leinster's schools and strength and conditioning coaches.

He progressed from a young teenager right through the ranks and was part of the recent Grand Slam-winning Ireland U20s set-up.

Another was Tadhg Furlong, reputed as the best prop forward in world rugby, who Dave says was identified despite the fact that "only seven or eight guys were turning up to training sessions at his club."

"He was spotted when he was 16 years old and we kept tabs on him all that time, and the rest is history," the Dublin native added.

By 10am on a given morning, Dave has put the players through their paces on the pitch, whether it's 10 degrees or -10 degrees, and he says it is in that environment you uncover the measure of the individual. They are off to college or work by midmorning as Dave combs the science, crunches the numbers and assesses the performance of each player.

The sub-academy is a crucible of sorts and Dave says it is both a physical and psychological test over the one or two years players spend there. He says a "weeding out process" takes place there and that is "the harsh reality."

"It's a test to see whether rugby is something you want to do as a job or as a hobby and you find out pretty quickly. At half six in the morning when it's below freezing, that's where you find out if someone is motivated or not."

"You know a certain amount of work needs to get done and you're not going to dodge it because it's cold or whatever; you get on with it and get it done. That's the measure of people; if someone is motivated all-year round, that's how we asses people as possible pros over a year to two in here."

Dave says managing the egos and perhaps expectations of much-hyped schools and club stars is quite simple. "It doesn't matter what you've done with your school or how big a star you were; you have to come in here and prove yourself, and if you do earn an academy contract, you've got to go and prove yourself all over again."

"It's not that we want to take that attitude in a bad way but it is a grounding for guys and one of the big things we preach is that you've got to be humble, no matter where you've come from or what you've done. In here, whether you're playing for the Lions or the U20s, you're treated the same."

"My job is to help Leinster produce professional rugby players and you've got to find out whether these, albeit talented kids, have the application to do it on a day-to-day basis," Dave said.

"When players get to the level with us here which is the final level for a year, you're talking about 70% turning pro. We're not going to take somebody in on a whim, so that conversion rate is quite high." The sub-academy has produced over 100 professional players since its inception in 2007, many of whom are multiple European and Six Nations winners.

The sub-academy at that feeder level is, however, also ruthless in that the other 30% of players, who in many instances have given a year or two of their lives over to chasing the dream of pro rugby, simply don't make it. Others have to be taken aside if they are on the precipice and those interactions are blunt, to say the least.

"Jack McGrath, when he was 18 years of age, was putting on too much weight and I pulled him aside and said, 'look it, if I see improvement week after week and we're starting to lose a bit of weight and all the rest, I'll help you, but if you're piling it on, I'm going to walk away from it,' and he did improve," the Leinster man explained.

"If someone is taking on board what we're telling them, we can work with them, and that's what I mean about holding the gun to the head a little bit from time to time."

Andrew Porter was another player Dave had to take aside to get on the right track but he said luckily "those guys were like sponges and they took it all in and they made it."

"In our job, you've got to learn that one individual is completely different from the other but definitely if we're not seeing improvement, the door is there, it's as clearcut as that."

With the conveyor belt of talent coming through Leinster's structures, and the many current stars who have spent time with the sub-academy, Dave says it is fantastic to see them lining out for the senior team or for Ireland, but echoing the principle of humility he instils in his recruits, Dave says, "we don't ever think that we've made those players."

"It's nice to be involved and nice to be a stepping stone but that's what I would say we are, a stepping stone. That said, we absolutely take great pride watching them all and it's a privileged position to be in because we see so many that go to that next level."

With almost a quarter of a century of experience around Leinster Rugby, Dave says the one defining characteristic it takes to make it at the highest level is attitude.

"Everyone that comes into us has ability, that's obvious because they've been scouted, but it takes something extra to make it as a top player. Attitude and self-drive is the one thing I look for, the player's own aspiration to be the best. All the players making it with Leinster now have that."