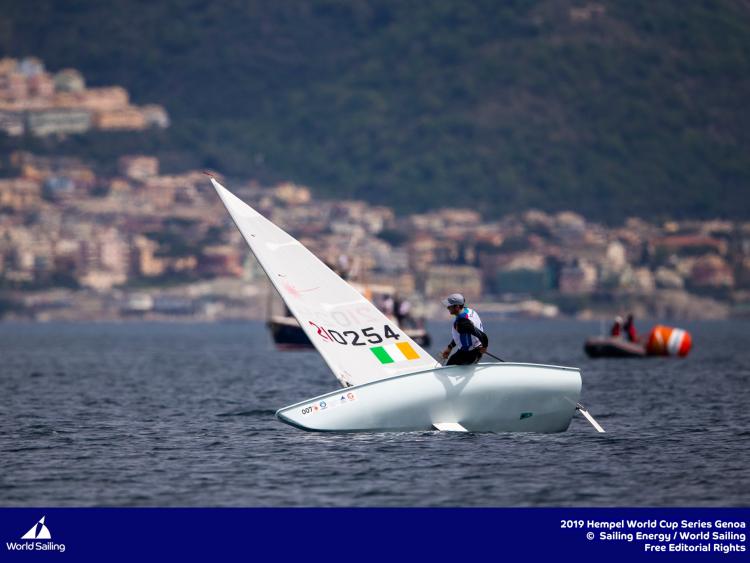 In a thrilling medal race final at the Hempel World Sailing Cup Series at Genoa, Finn Lynch from Carlow placed third over the weekend to claim fifth overall in the Men’s single-handed Laser event.

The result marks the third consecutive major regatta for Lynch this year in which he finished in the top 10 of his event in the lead-in to Tokyo 2020.

He entered the medal race final in seventh place overall with the possibility of a silver or bronze medal.

However, it was the sixth-placed Andrew Lewis, from Trinidad, who edged ahead into second place to take bronze, while Hungary’s Jonatan Vadnai placed fifth to win gold, with silver going to Pavlos Kontides who placed eighth in the final.

In fact, any of the 10 finalists were potential medallists and the neck and neck race was reflected at the finishing-line with first to last places just 50 metres apart.

As light winds dominated the week at Genoa, so too was the final race sailed in near calm conditions.

"Finn started well, didn’t get into any trouble and sailed to his tactics – a straight race that he executed very well," said Rory Fitzpatrick, Irish Sailing’s Head Coach.

"I’m delighted, seeing Finn come through from Toppers to Laser Radial then medalling at Youth Worlds and now contending for medals at senior level is outstanding."

Ireland has still to qualify in the Men’s single-handed Laser event for the Olympics with the next opportunity at the class world championships in Japan in July.