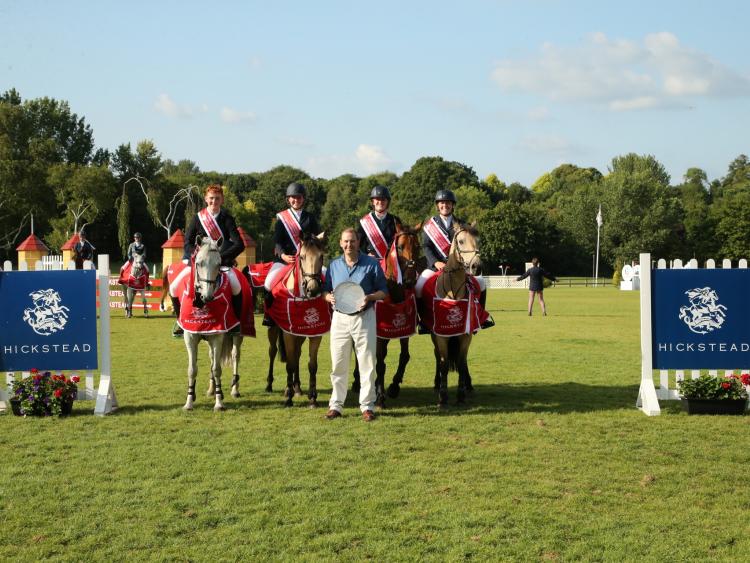 Pupils from the Borris Vocational School in Carlow rode out as the dual winners at the Hurst College National Senior Schools Jumping Championships.

Having produced three clears in the first round, the team was able to drop Catherine’s eight fault round and finish on a team score of zero. Former winners Wellington College and Millfield School finished second equal with eight faults.

Seventeen-year-old Aoife was the fastest of the five double clears in the jump-off, shaving 0.28 off the leading time to take the win ahead of runner-up George Laing from Hurst College.

It was a great day for the Borris Vocational School riders, with Claire Kavanagh (15) finishing eventual seventh in the individual honours, with 14-year-old Patrick Doyle finishing in eighth place.

Irish schools have a good record in this championship, with the title going to Newbridge College in Co Kildare 12 months ago, but this was the first win for the Borris Vocational School.

The school did finish in fourth place on their last visit two years ago, but this year they not only won the seniors title but brought a junior team as well, who also qualified for the final in Hickstead’s famous Longines International Arena.

“We also won the inter schools league back home in Ireland, so it’s been a good year for our school,” said Aoife.

Aoife’s horse Garryndruig Turbo is a former Grade A showjumper, and she has had the ride on her for three years. “She’s quite a cheeky mare, but she’s a pet in the stable and she loves jumping clear rounds,” she said.

Although it was a long journey from Ireland – with the horses travelling via ferry and the riders flying over – today’s win made it more than worthwhile. The quartet can continue the celebrations over the weekend when they go to watch international showjumping at the London leg of the Longines Global Champions Tour.

The Hurst College National Schools and Pony Club Jumping Championships were first held in 1964. Since then thousands of young riders have come to Hickstead each summer, each hoping to qualify to jump on the hallowed turf of the Longines International Arena.

Many familiar names have taken part in the championships, including riders Pippa Funnell, Robert Whitaker and Jessica Mendoza, as well as the Duchess of York, supermodel Jodie Kidd and BBC presenter Clare Balding.