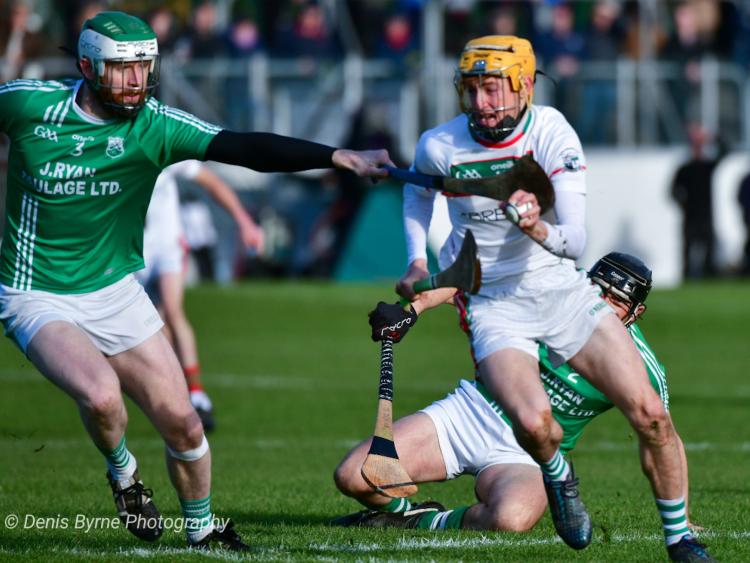 The referee pulled it back for an earlier infringement and Marty Kavanagh duly opened his account for the Carlow champions.

Rathdowney-Errill replied almost instantly, Mark Kavanagh angling over a free after his initial shot came back off the post and Brandon McGinley was fouled.

Minutes later, James Ryan tested the St Mullins goalkeeper Kevin Kehoe with a rasping shot he turned out for a '65 and Kavanagh sent over the placed ball.

James Doyle and Kavanagh traded points from play, and then two goals arrived in as many minutes.

Rathdowney-Errill hit the net first, Paddy Purcell setting off on one of his trademark runs through the middle of the field and, with the space opening up in front of him, unleashed a shot into the bottom corner from range. St Mullins hit-back instantly, Marty Kavanagh feeding Paddy Boland on the edge of the small square to rifle home with ten minutes played.

James Doyle beats five defenders, flicks it over heads and with virtually the last puck of the game, sends his club to their first ever Leinster final.

This is the stuff of dreams. This is amazing stuff. It's what club hurling is all aboutpic.twitter.com/Zf5YlGL23c

Rathdowney-Errill kept the momentum on their side with a fine point on the run from James Ryan, but St Mullins responded with Marty Kavanagh's second of the day.

The two Kavanagh's, Mark and Marty, traded frees before Rathdowney-Errill hit a purple patch with three points on the trot. Mark Kavanagh, Ross King and a long-range effort from All-Star nominee Jack Kelly all hitting the target for the Laois side.

St Mullins hit the front on the 25-minute mark with their second goal of the contest, Marty Kavanagh rifling into the bottom corner from distance to bring them to within a point. Jason O'Neill followed up with a point to level the sides with half-time fast approaching.

Two points from Mark Kavanagh, one from play and one free, arrived either side of a long-range Marty Kavanagh free to send Rathdowney-Errill into the half-time break with a slender one point lead after an end-to-end opening half of hurling.

St Mullins emerged for the second half and dominated the opening stages. Four points arrived for the Carlow champions in the first three minutes, two from James Doyle and a point apiece from Seamus Murphy and Marty Kavanagh as they took the lead.

Rathdowney-Errill settled with scores from Paddy McCane and Mark Kavanagh, but St Mullins kept their lead at two points thanks to Seamus Murphy's second.

Over the next ten or so minutes the sides exchanged nine points, Rathdowney-Errill hitting five through Mark Kavanagh (4) and Paddy Purcell while Marty Kavanagh was on hand to lift four white flags for the home side to leave just a point between them heading into the final five minutes.

Rathdowney-Errill wiped the slate clean in the 56th minute, Ross King coming out the field to perfectly measure his shot over the crossbar for the equaliser. The following minute, substitute Shane Madden dissected the posts to give Rathdowney-Errill the lead with three minutes of normal time remaining.

St Mullins still had gas in the tank and levelled on the stroke of 60 minutes with the excellent James Doyle plucking the ball from the sky and returning it over Rathdowney-Errill's crossbar. In the first minute of injury-time, Doyle hit his fifth of the contest to give St Mullins the lead with a minute of injury-time remaining.

Rathdowney-Errill had one final opportunity fall to Paddy Purcell, but his shot tailed to the right and wide as the final whistle sounded and with it their Leinster campaign.