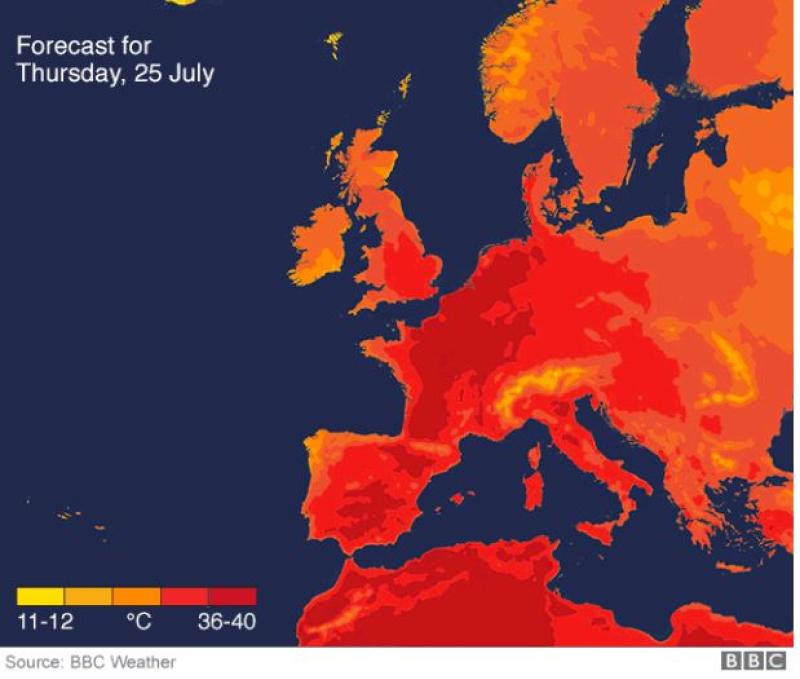 Met Éireann is predicting warm and humid weather up to 25C over the coming days as some countries across Europe prepare national plans for red alert record-breaking temperatures.

On Wednesday, July 24 many areas of Ireland will be dry with sunny spells. There will be a few outbreaks of rain in the southwest and later in the west. Maximum temperatures 18 to 24 degrees, warmest in the east, in mostly moderate southerly winds.

Wednesday night will remain dry in most areas, but outbreaks of rain and drizzle will develop in west Munster and in west Connacht. A few isolated showers may occur elsewhere. Feeling close with minimum temperatures 14 to 17 degrees, in mostly moderate southeasterly winds, fresh to strong in southern and western coastal areas.

Thursday, July 25 will start dry in the east and in the midlands with sunny spells. In the south and west, it will be cloudy in the morning with rain and drizzle.

The rain will move eastwards in the afternoon but it will become just light and patchy. In the west it will brighten up in the afternoon with sunshine breaking through. Warm and humid, with maximum temperatures of 19 to 25 degrees. A breezy day with moderate to fresh southeasterly winds, strong along west and southwest coasts.

Overall, there will be a good deal of dry weather for Friday and the weekend, but some scattered showers will occur. Fresher than previous days, with temperatures closer to normal, with maximum values of 18 to 22 Celsius. Still slightly above normal in parts of the east and southeast. Winds mostly light, northwesterly or variable, backing westerly or variable by Sunday. Some mist patches possible both nights in slack winds.

Monday to Wednesday changeable weather: Current indications suggest that our weather will remain changeable and unsettled with some scattered showers and possibly a spell of heavier rain extending from the southwest during Monday and Monday night.

Overall, a good deal of dry weather though, with temperatures close to normal. Winds mostly moderate, southerly or southwesterly, but fresh to strong at times on Atlantic coasts.

Forecasters predicted new temperature highs in a string of countries, including Belgium, Luxembourg, Germany and the Netherlands, where the mercury is set to reach 40 degrees Celsius for the first time on Thursday.

In Britain, temperatures could exceed the all-time record of 38.5 degrees Celsius on Thursday.

The French city of Bordeaux has hit its highest temperature since records began, as Western Europe braces for the second heatwave to hit this summer.

On Tuesday, Meteo France registered 41.2 Celsius in the south-western city, breaking a 2003 record of 40.7 Celcius. 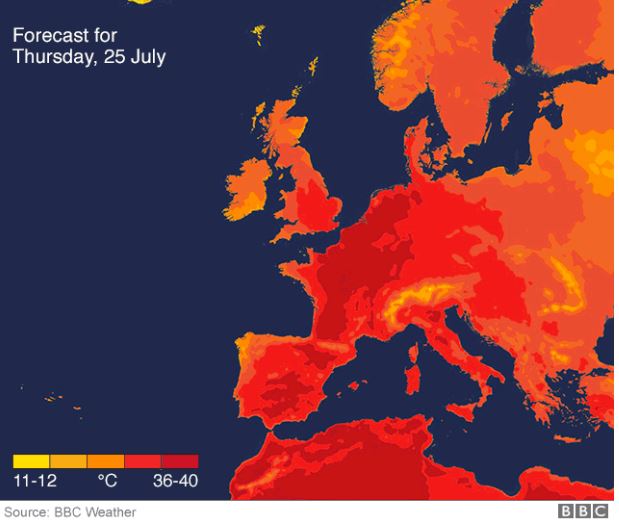 In an unprecedented move, Belgium has issued a code red weather warning for the whole country.

Spain declared a red alert in its Zaragoza region, which was hit by wildfires last month. The European Commission's Copernicus Climate Change Service says the risk of wildfires is high in Spain and in Portugal.

In the Netherlands, the government activated its "national heat plan".