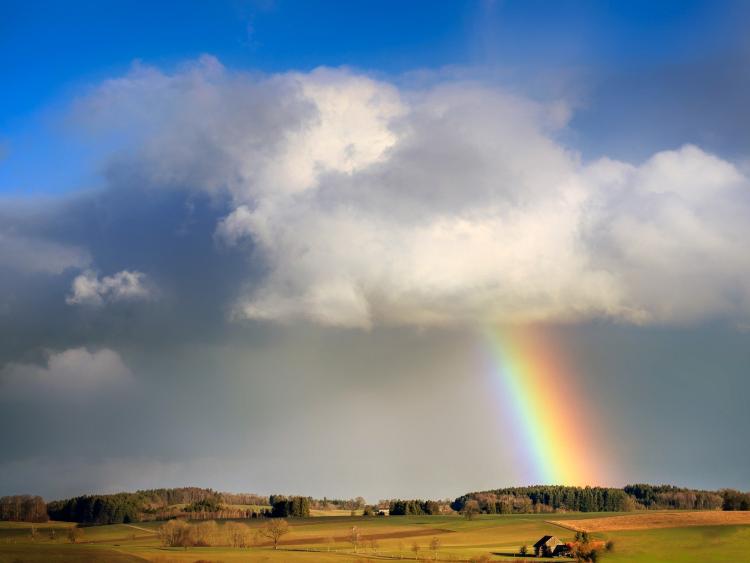 Mostly cloudy this Monday morning with rain, mainly in the north and eastern coasts, continuing to clear, according to Met Éireann.

Drier and brighter weather with sunny spells will extend from the west this morning and early afternoon, with isolated showers following. Highest temperatures of 15 to 19 degrees with brisk northwest breezes developing, coolest up along Atlantic coasts.

Mostly dry tonight with clear spells, though well scattered showers will continue - most of these in the north and northwest. Lowest temperatures of 8 to 12 degrees in mostly moderate west to northwest breezes.

Tuesday
Tuesday will be a mostly dry day with sunny spells. However, cloud will build into the afternoon and scattered showers will occur, with most of these across Atlantic counties. Cool for the time of year, with highest temperatures of 14 to 17 degrees in moderate, occasionally fresh, west to northwest breezes.

Tuesday night will be cool, calm and mostly clear. Lowest temperatures of 6 to 9 degrees Celsius.

NATIONAL OUTLOOK
Changeable and unsettled this week. Temperatures a little on the cool side of average early on, but becoming warm and humid later.

Starting out mostly dry with hazy sunshine in the north and east. However, it will become cloudy across the southwest and west with outbreaks of rain and drizzle moving in off the Atlantic, very gradually spreading elsewhere later. Relatively cool with highest temperatures of 14 to 17 degrees Celsius, in light to moderate southerly breezes.

Mild, humid and misty on Wednesday night with further outbreaks of rain and drizzle - possibly some very heavy falls later. Lowest temperatures of 11 to 14 degrees, in freshening southerly winds.

Another warm and humid day with hazy sunny spells. Overall dry, though some showery bursts of rain will occur too. Highs of 19 to 24 degrees Celsius, in moderate southwest breezes.

Current indications suggest temperatures will slip back again this weekend.