IRELAND WEATHER: Weather forecast for Ireland for the coming week from Met Eireann 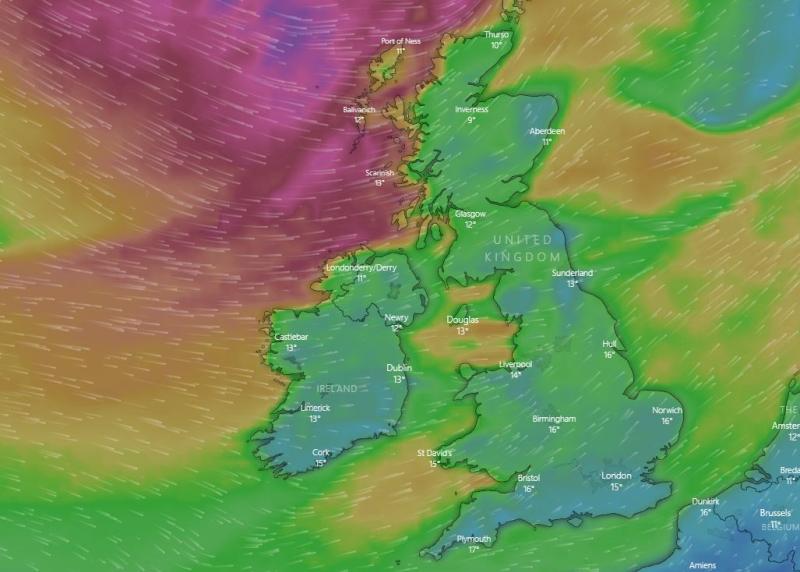 Wet and windy weather is set to hit Ireland this week. PIC windy.com

The weather forecast for the coming week from Met Eireann is for wet and windy weather to affect the country later in the week. According to Met Eireann, after a settled start to the week there is growing confidence in a more unsettled spell developing with wet and blustery conditions at times through the rest of the week and the weekend.

The weather forecast for Ireland for Monday is for the day to be mostly cloudy with light showers or patchy drizzle at times in the west. The showers will peter out in most areas during the afternoon, however they will persist along the northwest coast. Highest temperatures of 16 to 19 degrees, in light to moderate westerly breezes.

Staying mostly cloudy overnight on Monday with just isolated patches of drizzle or mist, mostly along the west coast. Lowest temperatures of 9 to 14 degrees, in mostly light west to southwest breezes.

Remaining mostly dry and cloudy on Tuesday with occasional brighter spells and the continued chance of patchy drizzle or mist at times near the Atlantic coast. Highest temperatures of 16 to 20 degrees, in mostly moderate southwest breezes, becoming fresh to strong at times in the northwest by afternoon.

Remaining cloudy in the northwest on Tuesday night with a band of rain, heavy at times, extending over Connacht, Ulster and west Munster. Further to the southeast it will remain dry with some clear spells developing. Lowest temperatures of 11 to 14 degrees in mostly moderate to fresh southwest winds.

The weather forecast for Ireland for Wednesday from Met Eireann says that the band of rain will continue to extend southeastwards clearing the southeast coasts by evening, while drier and somewhat brighter conditions will follow before another band of rain extends into northwestern parts by evening. Highest temperatures of 15 to 19 degrees, in moderate to fresh westerly winds, strengthening along northwest coasts during the afternoon.

Rain and blustery conditions will extend to all parts overnight on Wednesday, clearing to scattered showers, most frequent along northern coasts, by morning. Lowest temperatures of 8 to 12 degrees in mostly fresh and gusty west to northwest winds, becoming strong to near gale along at Atlantic coasts.

According to the latest weather forecast for Ireland from Met Eireann, there will be sunny spells and scattered blustery showers on Thursday the showers will be most frequent in Ulster and along western coast with much of Munster and south Leinster remaining dry throughout. Highest temperatures of 12 to 16 degrees, coolest in Ulster, as fresh and blustery northwest winds gradually ease moderate later in the day.

After an overcast and damp start with patchy outbreaks of rain, there will be some sunny spells and scattered showers to follow from the west on Friday. Highest temperatures of 15 to 19 degrees, with moderate southerly breezes veer westerly through the morning and freshen.

Met Eireann says that current indications are for the unsettled conditions to continue over next weekend, Saturday remaining mostly cloudy, but milder and with some scattered showers before a band of heavy rain crosses the country overnight followed by a cooler day with sunny spells and blustery showers on Sunday.