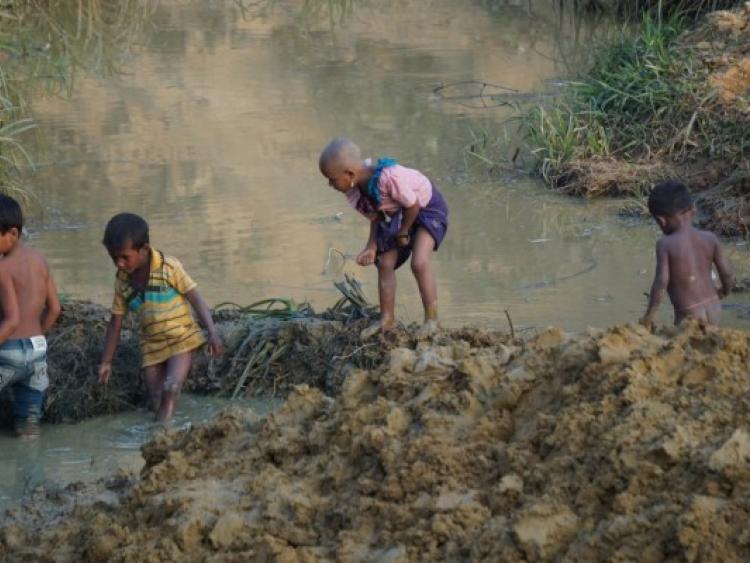 On August 26 this year the United Nations Report of the Independent International Fact-Finding Mission on Myanmar officially declared the violence against Rohingya Muslims in northern Myanmar to be a campaign of genocide.

This acknowledgment comes after decades of persecution.

"The Stateless" - an archival exhibition at VISUAL - documents the journey that the Rohingya community in Carlow have taken, and reflects on the tragic inhumanities that continue to be inflicted on the Rohingya in Myanmar.

Photographs taken by Mohammed Rafique in 2017 show the suffering endured by the Rohingya in Myanmar and the camps in Bangladesh; drawings and paintings reflect on the communities cultural identity and an archive of information about the Genocide of the Rohingya calls on the public to witness and be aware of this crisis, and the lives of those who have been displaced, persecuted, murdered and tortured.

The Rohingya Community in Carlow came in 2009 after they were resettled from refugee camps in Bangladesh by the United Nation Refugee Agency (UNHCR).

The refugees were part of the 250,000 Rohingya who fled their native land Burma [Myanmar] during the Burmese Military in 1991/2 in an operation known as Operation Pyi Thaya or Operation Clean Nation.

In another systematic State-sanctioned operation in August 2017, 700,000 Rohingya fled Myanmar to refugee camps in Bangladesh causing a disintegration and displacement of a community.

This exhibition has been created in collaboration with Haikal Mansor, Mohammed Rafique, members of The Rohingya community in Carlow and Carlow based Rohingya Action Ireland which is made up of both local and national support  networks.

For further information on the Rohingya and this campaign of genocide visit stateless.com and rohingya.ie
Supported by Carlow College, Carlow County Development Forum, the Stateless, Rohingya Action Ireland.