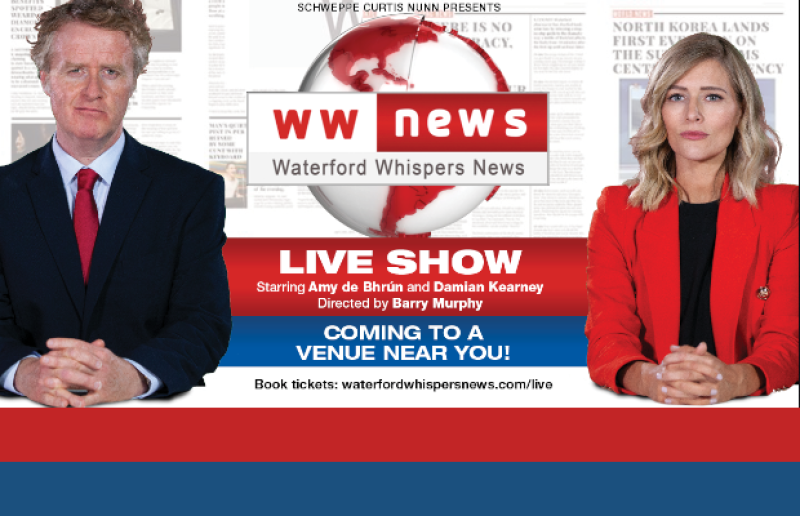 The brand new live show from the outrageously popular satirical website Waterford Whispers News is on tour this autumn celebrating ten years online and it's coming to VISUAL in Carlow on November 2.

With headlines like “Jesus Not Coming Back by the Looks of it, Admits Vatican”; “Dozens Injured in a Stampede as Second Checkout Opens in Lidl”; and "North Korea Lands First Ever Man on the Sun”, Waterford Whispers News is everybody’s favourite daily dose of online satire, acquiring more than 14 million readers last year in pretty much every country in the world.

So sharp are the headlines, that Waterford Whispers News has made the actual, real news on many occasions, with pastors in America's bible belt railing against the Jesus story, Lidl's German management team telling their Irish staff that they never wanted to see headlines like the stampede story again and several media organisations like CNN reporting as fact the North Korea landing a man on the sun story!

But more than that, Waterford Whispers News's writers offer smart and funny insights into the unique oddities of what it is to be Irish with stories like: “Irish Army Deployed to Narnia”; “FAI Fined After Republic of Ireland Score Twice” and “Is Coppers all it’s Cracked Up to Be? We Investigate”.

All of this brilliance has now been captured in a stunning live show set in the WWN Newsroom, as our two TV news anchors – Áine Ní Lása and Les Duggan –deliver a rapid-fire, subversive, rollercoaster of a production complete with video reports, in studio interviews and spoof adverts that will have you in stitches and questioning every news broadcast you ever see afterwards.

For more information on tickets for the Carlow show, click here.