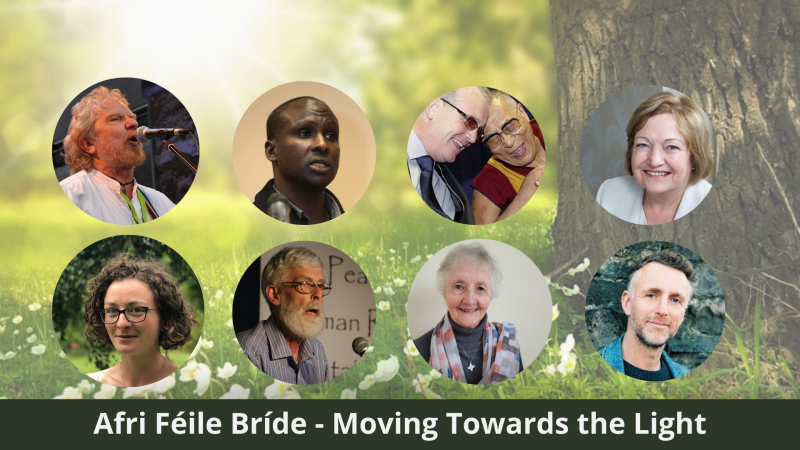 People from County Carlow are being invited to tune in and hear Nobel Peace Prize Laureate Mairead Corrigan Maguire and Richard Moore, a man known as ‘the Dalai Lama’s hero’, at the annual Afri Féile Bríde event which takes place online this Saturday afternoon (Fevruary 5).

Irish peace and justice organisation Afri has hosted the event every year in Kildare since 1993 but the pandemic forced organisers to move online last year.

The virtual Féile Bríde event was a huge success with hundreds joining from around the world and while it is expected to return to Kildare next year, this year the virtual option remains hugely popular. Organisers say that among the hundreds already registered, are people from Brazil, Guatemala, South Africa, North America, and Vietnam.

One of those speaking at the event is Belfast woman Mairead Corrigan Maguire who won the Nobel Peace Prize in 1976 in recognition of her work as a founder of the Northern Ireland Peace Movement, which was later renamed as Peace People.

Mairead shared the prize with Betty Williams, a woman who witnessed the killing of Mairead’s sister’s three children, which led to the founding of the Peace People movement In recent decades Maguire has remained a committed peace campaigner and a staunch critic of war and the weapons industry.

In 2006 she co-founded the Nobel Women’s Initiative. She has also been active in support of the Palestinian people and in June 2010 she was part of the flotilla of boats that attempted to break the blockade of Gaza.

Derry man Richard Moore is also due to speak at the Féile Bríde event.

Richard’s uncle was one of those who was killed on Bloody Sunday. And later that same year, on May 4th 1972 a ten-year-old Richard was on his way home from school, when his life changed forever.

As he ran past an army lookout post, located at the edge of his school’s playground, a British Soldier fired a rubber bullet from ten feet away, blinding him for life. This is where his remarkable story of forgiveness and compassion begins.

Despite losing his sight in such a traumatic way, Richard returned to his old school, went on to university, successfully ran his own business, became an accomplished musician, married and had two children, and went on to found the international development organisation Children in Crossfire.

Moore is known as an inspirational voice for peace and compassion after choosing not to hold bitterness towards the soldier who shot him.

In 2006 Richard met that soldier and they became friends. Richard’s work for change has been recognised by the Dalai Lama, with whom he has become good friends. At the tenth anniversary of Children in Crossfire the Tibetan leader described Richard as his hero and “a wonderful son of humanity”.

The Féile Bríde event will be hosted by campaigner and Hitching for Hope author Ruairí McKiernan and other speakers include Abjata Khalif, an acclaimed journalist and a development worker from Kenya, who is also Chair of the Kenya Pastoralist Journalist Network.

Other speakers include Ciara Murphy from the Jesuit Centre for Faith and Justice, former UCC Professor John Maguire. The event will be opened with the annual lighting of a flame by Rita Minehan, co-founder of Solas Bhríde Centre and Hermitages in Kildare. Legendary County Down folk singer Tommy Sands will also perform.

Afri coordinator Joe Murray says the event this year comes at a particularly appropriate time and aims to celebrate the work of peace while challenging the violence and aggression in the world.

“I am mindful of the recent tragic death of Ashling Murphy in Tullamore and the many other victims of violence in our society. We must challenge images of maleness that celebrate aggression and dominance and instead promote kindness and compassion as strengths. This for me is the message of Brighid of Kildare.

“We must challenge the culture of violence and oppose it in all its forms. This includes opposing the Irish government’s new efforts to encourage weapons production in Ireland and to significantly increase military spending and military hardware.  We are fortunate to have incredible voices of peace joining us on Saturday – some of whom know the reality of war and violence at first hand.

“I would encourage everyone who can to register for what is sure to be a timely,  uplifting and hopeful event as we move into the springtime”.

The online event runs from 3pm-4.30pm this coming Saturday, February 5. Registration is free but donations are welcome. See www.afri.ie