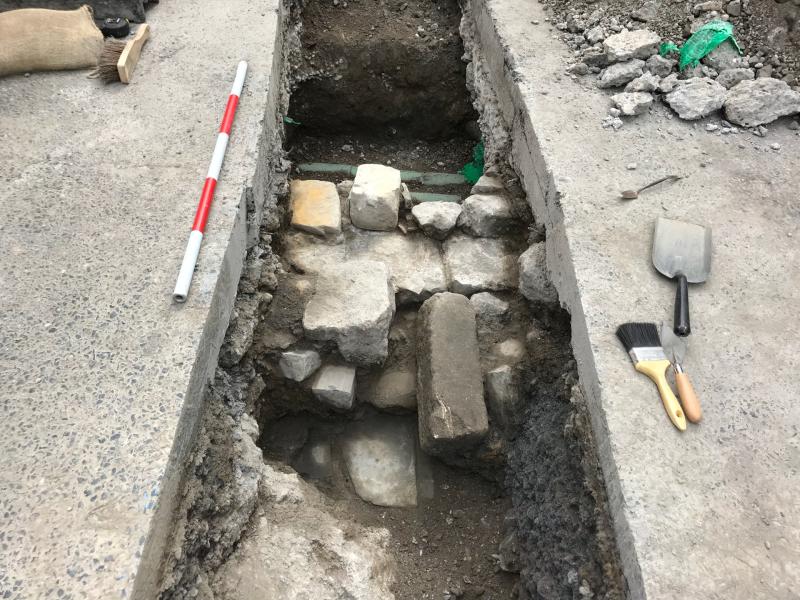 First picture of the historic discovery in Carlow Town

Shanarc Archaeology are to carry out a '3D laser scan' of what is strongly believed to be remnants of Carlow's Town Wall -  it's the first time that any piece of the centuries-old wall has been found.

The archaeological consultants - subcontracted to oversee the water upgrade works on Tullow Street - say the scan will be done before the one metre long section of the wall (pictured above) is removed from the trench.

Speaking to Carlow Live, managing director of Shanarc Archaeology, Seán Shanahan, said: "Where the wall was exposed has been left for the moment to re-apply for a road closure permit to carry out the excavation in the coming weeks.

"In consultation with Carlow County Museum it has been agreed to remove the section of wall and reconstruct it to be put in the museum for display.

"We'll do a full 3D laser scan before it's removed, then excavate and then reconstruct the wall. We'll desconstruct it stone by stone. There are roughly four courses of the wall that survived.

"Where it is, it's on the money for part of the town's defense. It's not been confirmed but it's in the right location at the junction of College Street and Tullow Street."

Shanarc Archaeology have been liasing with the National Monuments Service - the body tasked with the excavation of such historical discoveries.

The wall couldn't be left in situ as ordinarily when it comes to sites of this importance it's recorded and left there. However, in this instance that couldn't be done as the wall is so close to the original surface of the road.

For this reason the water main couldn't go over it and the pipe couldn't go under it as the mains would compromise the integrity of the historic wall; so it is a case of preservation by removal.

Mr Shanahan added: "Historically there is a reference to a Town Wall and a gate at that end of Tullow Street. We were tasked to monitor the excavation works.

"It was constructed between 1361 and 1366 to improve the defenses of the town as it served as the exchequer during that time. The town was English and there was a fear of marauding Irish tribes.

"It was being attacked by the O'Moores, O'Connors, McMurroughs regularly and they would burn the town. The defenses would've been built to keep the native Irish out.

"It's the first time the Town Wall has been identified; assuming we're right. It's ironic because it's right beside the Carlow County Museum."