Gardaí in Carlow have issued crime prevention advice to Carlow homeowners after "a spike in burglaries" across the county in January.

Gardaí are asking people to take the time to review the security around their homes going forward and reminded them that the real-time notification an alarm can give homeowners is a "real deterrent".

In the premises where there is an alarm the culprit doesn't have time to search the house or to get away with any significant property.

In some of the incidents, details of which will be given below, garages and sheds have been targeted and Gardaí advise that those with an alarm on their house, extend it to cover their shed as well.

Anyone looking for more information on this can contact the Kilkenny/Carlow Crime Prevention Office on 056 777 5091.

Gardaí say it is about getting the message out for people to secure their properties.

They have also issued the following advice:

External dusk to dawn white LED lighting should be considered for dark areas around your home.

Internal lights should be timed to come on as dusk falls. This will give the appearance of the house / building being occupied.

Consider an alarm for your home. If you have an alarm use it at all times. It should be extended to your garage / shed.

Mark your property both covertly and overtly. Marked property is less likely to be stolen and more likely to be identified and returned to its rightful owner if recovered.

Consider GPS trackers for property such as ride on lawnmowers, trailers, caravans, and construction vehicles.

CCTV should be considered where you have a large volume of property stored.

Gardaí are currently investigating a number of incidents in the Carlow area during the first two weeks of January with fifteen burglaries to date.

At The Elms on the Athy Road on January 13 a burglary occurred between 5.45pm and 7.15pm when the homeowner returned to the property to find the rear door forced open and a small quantity of cash and jewellery was stolen.

The second incident on the same date and in the same estate occurred at 6.20pm. An alarm was activated and the homeowner returned to the property to check and discovered a window pane had been removed.

A handbag with a quantity of cash was taken during the incident.

A third incident, in or around the same time on the same date and same location, occured at an unoccupied property.

Rooms were ransacked and a quantity of cash and jewellery were stolen. Entry was gained by forcing a rear window of the home.

Another incident in Oak View on the Athy Road on the same date, January 13, occurred between 5pm and 6pm. The front door was forced open, a bedroom was ransacked but no property was stolen.

Gardaí conducting the investigation believe the incidents are connected. From enquiries so far Gardaí are looking to establish the movements of a black Audi A4 with distinctive alloy wheels.

Anyone who may have had sightings of that car or its occupants in or around The Elms on the Athy Road and Oak View area on January 13 are asked to contact Carlow Gardaí on 059 913 6620.

Bagenalstown Gardaí are investigating three burglaries in the last two weeks which include a burglary in the Clonmullen area and are interested in the movements of a green 06 CW Skoda Octavia which was stolen during the burglary on January 11 at 2.30am and later burnt out.

A number of electrical items were stolen during the incident and the vehicle was later found burnt out at 6.15am near Springhill in Killeshin.

The incident is connected with another burglary where a woman was hospitalised after an assault when three men entered her home and stole her grey/silver coloured Nissan Qashqai at around 4.30am on the same date.

At least three culprits were involved in the incidents and the vehicles and the scenes have been technically examined.

A joint investigation is underway between Bagenalstown Gardaí and the Laois/Offaly Garda Division.

A second incident in recent days left a Carlow woman shaken after two men - one of whom was armed with a hammer - broke into her home on Tuesday night.

A third incident on Thursday, January 10 between 3.30pm and 4pm occurred at Kilcarrig, Bagenalstown when the injured party's shed adjacent to the house was broken into after a lock was broken and power tools were taken.

Gardaí have issued a specific appeal in relation to a red estate type car pulling a trailer which was in the area around the time of the incident.

Anyone with information is asked to contact Bagenalstown Garda Station on 059 972 1212.

Gardaí in Tullow are investigating burglaries which occurred between January 8 and January 10.

In Court View a homeowner returned to find a rear patio door smashed and a small amount of money taken.

Gardaí said that going forward adequate locks are one thing but with windows and patio doors being smashed an alarm is also very important.

A second burglary on Wednesday, January 9 occurred in Steepleview Crescent when a house was entered after the front door was forced open and a blue generator that was stored in the house was stolen.

Meanwhile in Carlow Town, in Crosbie Place off Little Barrack Street on January 9 between 2pm and 5pm, homeowners came home to find their rear patio door smashed with a quantity of cash stolen and the house gone through.

While on the same date, between 4.30pm and 7.20pm there was an attempted burglary at Old Burrin but the culprit didn't get in.

The outer pane of a double glazed patio door was smashed.

Meanwhile, you can also fill out An Garda Síochána's Crime Prevention Information Sheet by clicking here. 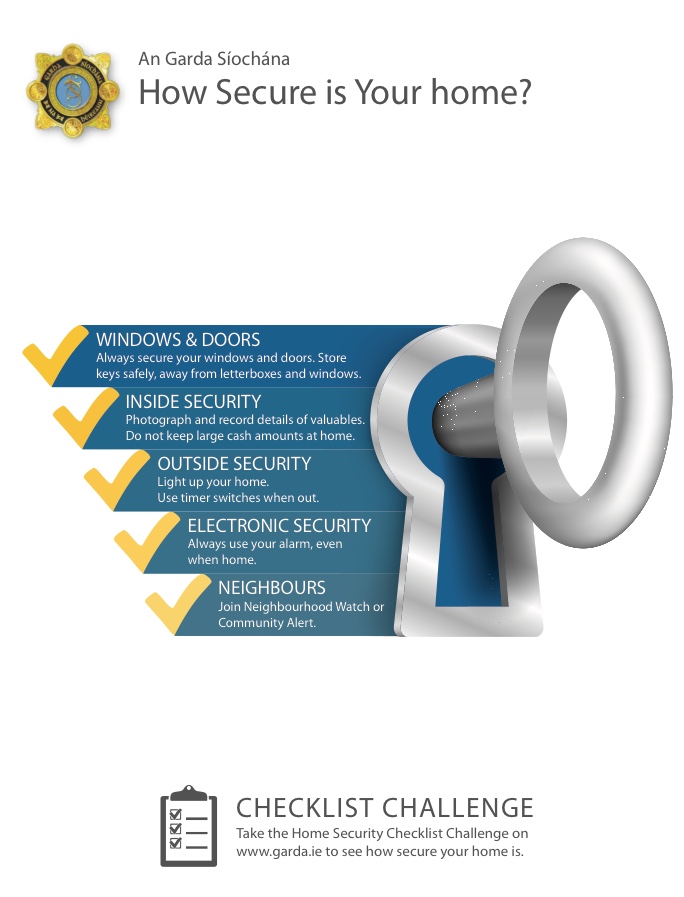