PICTURE: Tullow boasts a new tourism map which highlights 19 of the town's attractions 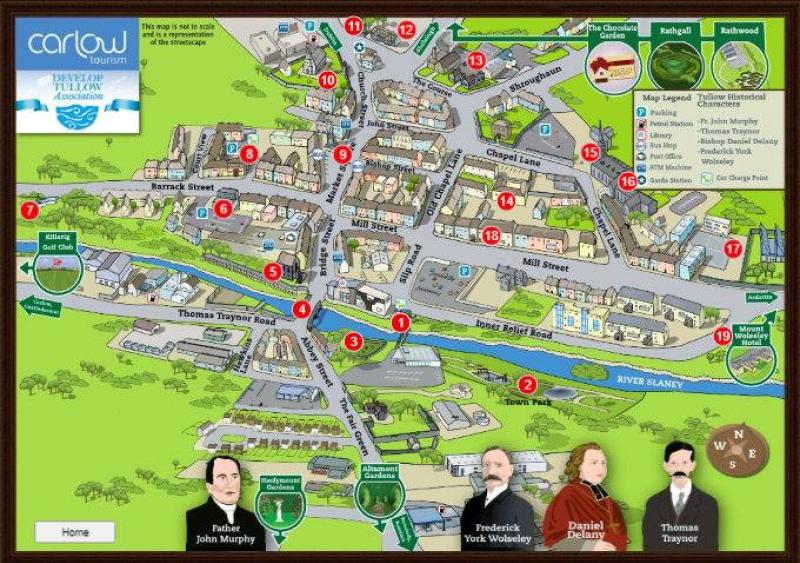 A visit to Tullow has become a much more informative and engaging experience with the launch of a new tourism map for the town.

Read also: 'Calling on everyone in a 50km radius of Rathvilly,' let's support The Wildflower Café

The detailed map (pictured above) highlights 19 of the town's attractions from an historical and cultural perspective and has been created by Tullow Tidy Towns/Develop Tullow Association (DTA) with the support of Carlow Tourism.

20,000 A4 booklets have been produced, each containing detailed maps of Tullow’s various historical places of interest.

The maps have been distributed to 13 locations within Tullow, including Mount Wolseley Hotel, Rathwood and Tullow Credit Union.

A digital interactive map is also available on Carlow Tourism’s website, where each of the 19 sites identified can be viewed individually, with each featuring historical information and videos on the locations.

To view the map, go to www.carlowtourism.com/tullow-map

Large, framed pictures of the map have also been produced and will be placed at six prominent locations in the town, including Tullow Museum and Tullow Civic Centre.

Among the 19 places featured are the Water Bailiff's Hut, the Fr John Murphy Statue, the Abbey Graveyard and the Blessed Well.

The tourism map came about because of comments made by a national Tidy Towns adjudicator, who suggested that a map would be a very useful addition to the town.

The tourism map is now available at outlets throughout the town.