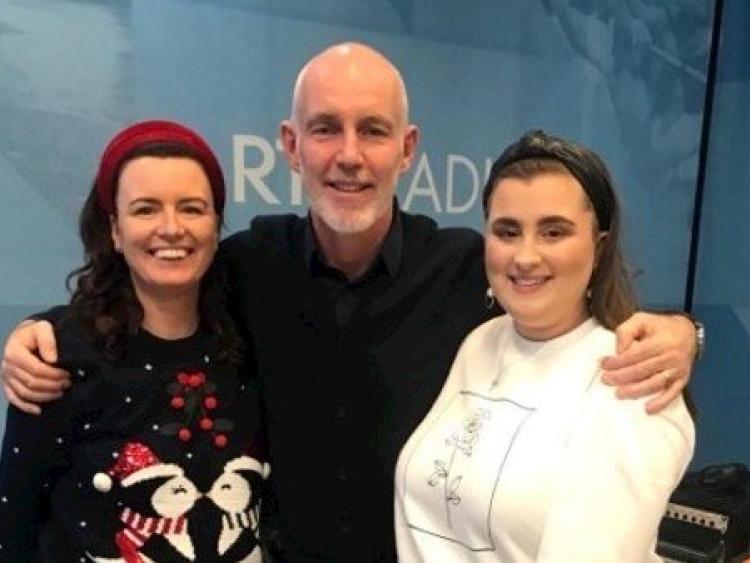 Leona Tynan pictured on Wednesday with Ray Darcy and her daughter, Shauntelle

Carlow woman Shauntelle "Shan" Tynan is celebrating one year free of active cancer following pioneering cancer treatment in the US.

Read also: 'I wasn't scared of dying, but I didn't want to die,' Shan Tynan talks about planning her funeral

Shan was diagnosed with Histiocytosis X when she was sixteen, a rare form of cancer and travelled to Houston, Texas in 2017 after raising over €750k for a ground-breaking treatment there when her video appeal for donations went viral.

"To be told that we had to come up with a minimum of €500,000 just for the initial treatment in a couple of months, in my head I was saying this can't happen so I'm going to lose my child.

"I felt so powerless. She was really miserable and I decided I was going to cook her favourite dinner [which is a roast]," her mother Leona told the Ray D'Arcy Show on RTÉ Radio 1 on Wednesday.

Leona said she had no idea that Shan had posted a video online until donations came flooding in.

"I was down in the kitchen cooking the dinner and my phone started to buzz because she had uploaded this video unknownst to me. It was just in the moment and she went with it.

"Everything was boiling over while I was looking at my phone and I thought there's an error, something is going on like, and I started screaming the house down because there was so many emails coming in from GoFundMe that I couldn't keep track.

"Within a few minutes, it was over like €100,000. For the next 24 hours, the dinner boiled over, we didn't sleep, we just sat there refreshing the page. This meant everything to us. I can't even describe it."

Shan stayed in Texas to receive treatment for 20 months, returning home to Ireland one year ago.

"I had to go to Texas and this was the last video I thought I'd upload on it. I feel like I can never say thank you enough. That year [in the States] was just so powerful for me. Everything worked out perfectly," Shan said.

"I matured really well in the hospital but anything outside the hospital, like real adult life struggles, college, things like that, I missed out on.

"When you have to plan your funeral and do that kind of almost with a smile because you want to be positive about it and you want that experience to be good for the people around you."

Read also: 'We are over the moon,' Carlow's Shan Tynan 'completely stable' after latest check-up

Shan added: "I didn't really think about it being a funeral for myself but for the living and the people who would be there and how they would cope when I was gone...it wasn't about me.

"Obviously I wanted to live but at the same time, I was worried about everyone else around me if I was gone. That was like the biggest struggle. [The doctors in Texas] always tried to keep me positive and always approached everything with a smile. That's what helped us."

Shan said while there is no cure for her cancer, it is dormant which allows her to live normally.

"It doesn't actually get to cancer-free, but it gets to no active cancer. There's no cure but it's dormant. There's no evidence of the disease for a year now. It's brilliant.

"I'm on one oral chemo tablet a day and I'm on a few other medications but I'm doing really well.

"The first thing I did was get back into fitness because I lost a lot of my stamina throughout chemo and I obviously gained a lot of weight on steroids. I exercise twice a week, I do intense classes and then I do a walk each day.

Shan and Leona are now looking forward to spending Christmas with their family in Carlow.

"I'm so proud of her, we've come a long way. There was days there where it didn't look very bright, it was very tough. We're excited now," Leona said.