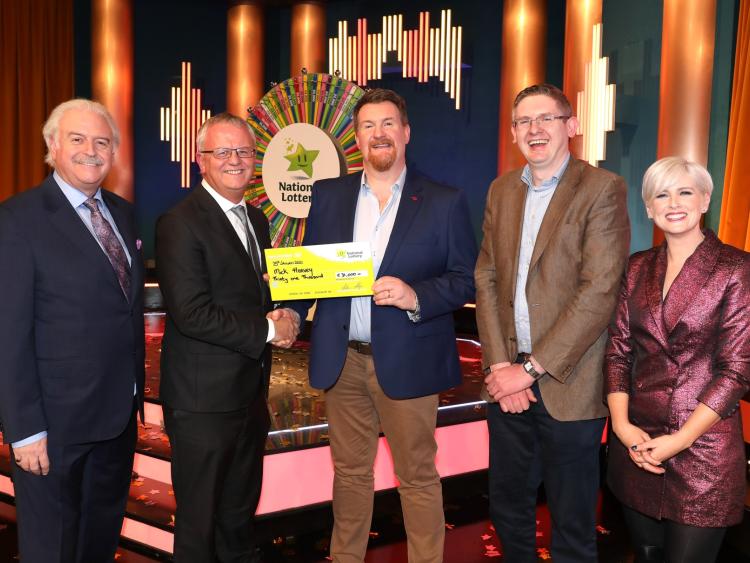 A chef living in Kilkenny, originally from Dublin, has certainly cooked up a storm, winning a tidy €31,000 when he appeared on the National Lottery TV game show Winning Streak last Saturday, January 25.

Mick Harvey from Talbot’s Inch Village, Kilkenny City, who was born and bred in Dun Laoghaire in Dublin, was thrilled with his win of €28,000 in cash and a holiday to Venice, Italy worth €3,000.

On the show Mick spoke of how he was back in the capital visiting his mum Mary the weekend before. Mick was feeling bullish as he knew he had sent in a scratch card with three stars to the National Lottery that week.

The first two names came out of the drum were from Cork so he jokingly shouted at the TV screen – Come on Kilkenny! With that, Winning Streak presenters Marty and Sinead, pulled his ticket from the drum and called his name out. Mick almost collapsed with shock and he began to jump around his mother’s house shouting in celebration and sheer disbelief.

Mick has two children, Mary (named after her grandmother) and William, as well as his wife Sheila who were all watching back in Kilkenny and were beside themselves with excitement. Mick and Sheila celebrated a decade of marriage on New Year’s Eve just gone.

Mick has five siblings, all of whom are living in Dublin except one sister, Margaret, who lives in Ottowa, Canada. The other four, who were cheering him on from the RTE audience last Saturday are Gerry, Angie, Liam and Helena.

Sheila is from Kilkenny and Mick winded up meeting her when he moved down there to work as a chef. The couple hit it off and Mick loves like in Kilkenny and insists he would never move back.

Two children later, the couple now live in the lovely Talbot’s Inch village. Mick is now a chef for KSG and looks after catering for MSD Pharmaceutical company in Carlow, where he keeps 650 employees fed.

In his spare time Mick is quite the singer and sings in two choirs: the Kilkenny Unity Choir and the Sipero Men’s Choir.

The Winning Streak National Lottery TV game show is co-presented by Marty Whelan and Sinead Kennedy and features some perennial favourite games including Play or Pay, Roll for Riches, WinFall and Electric Dream – where one player will win an electric car worth €25,000.