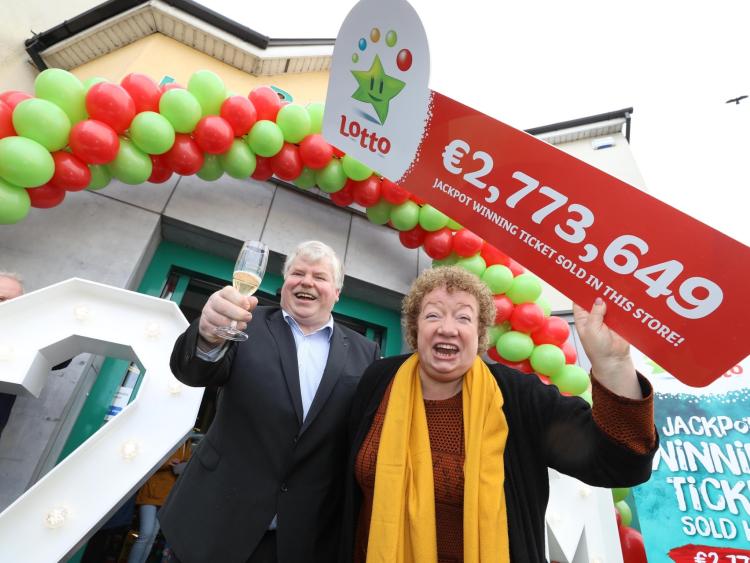 An overjoyed family syndicate from Carlow recounted the moment they realised they had won €2.7m after one of them said  to the rest of the family, before the Lotto draw, "watch this now – we’re going to win the Lotto".

It comes as the National Lottery announced that the store which sold Saturday's jackpot winning ticket is Rath’s Londis store in Pollerton, located in Carlow Town.

The winning family syndicate, who have been playing Lotto together religiously for the past five years, spoke of their shock at realising that they had won.

One of the family members said: "I was watching the Lotto draw on RTÉ One on Saturday and was sitting there with my pen and paper ready to tick off my numbers while my husband was in the living room watching the Dublin vs. Monaghan football match.

"As the Lotto Plus 1 and 2 draws were on I didn’t match one single number. I shouted in to my husband – 'Here we go, watch this now – we’re going to win the Lotto' before the main draw took place.

"You can imagine the look on my face as, one-by-one, I had every single number.

"After that it was all a blur. I just started screaming. He ran in to see what the commotion was. It was such an incredible moment – something you know you’ll never forget."

"We called the rest of the family and spread the good news and of course of course they thought I was having them on. Each and every one of them arrived quick as a flash to make sure that it was true," the family said.

As for plans for spending their new windfall, the Carlow family syndicate revealed that after their mortgages and bills have been paid off, they will take a number of months before deciding what else to do with their prize.

The family insisted that they will not let this Lotto win change them but it will make them very comfortable in life.

Speaking on selling the winning Lotto ticket, Willie Rath, store owner of Rath’s Londis, who has run the store for over 36 years, said: "We had absolutely no idea we sold the winning ticket.

"There has been a hive of excitement in the county since the National Lottery announced that a winning ticket was sold in the town on Saturday but we never guessed that it would be sold here.

"We’re thrilled to hear that a local syndicate has already claimed their prize and we wish them every bit of luck with their prize. It’s a fantastic win for the community here – we are a small local store where the vast majority of our customers are local so I know that they will be delighted for the winners also."

This is the second Lotto jackpot winner of the year after the first Lotto jackpot, won on 29th January, worth €7.7 million was shared between two winners in Dublin.