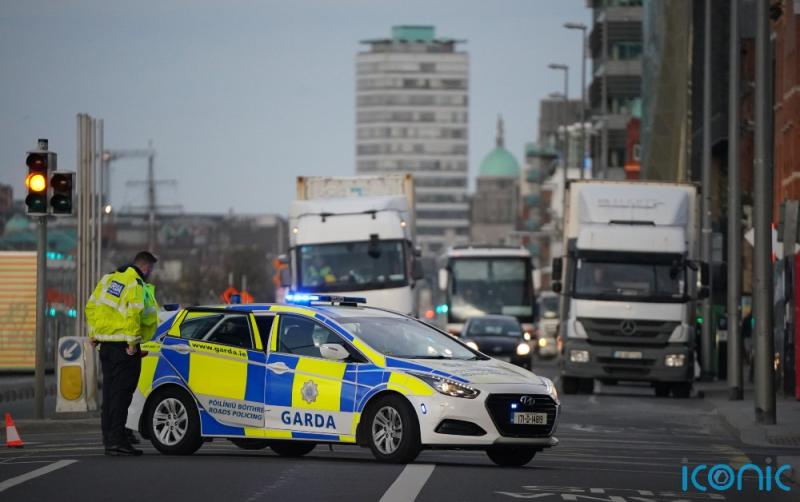 A number of hauliers and truckers protesting over spiralling fuel costs have been fined for obstructing roads in the docklands area of Dublin.

The protest has caused disruption in the east of the city after demonstrators gathered from early Monday morning.

People of Ireland Against Fuel Prices has threatened to bring “complete lockdown” to the city.

There were plans for slow-moving convoys of vehicles to travel along a number of motorways into Dublin city centre.

Early on Monday, the protest appeared to centre on the docklands area.

The usually busy roundabout outside the 3Arena was also blockaded, causing the closure of North Wall Quay.

The entrance to Dublin Port and the Port Tunnel was heavily congested.

Some truck drivers remained in their parked cabs while others stood in groups on the road.

Gardaí at the scene warned drivers to move their vehicles from the public road or they would be issued fines for obstruction.

Many of them refused and told gardaí they would stay “for the rest of the day”.

All drivers were issued financial penalties for obstructing a public road and others could face penalty points for refusing to comply with a Garda direction.

They have been warned they could face further penalties if they continue to refuse to move.

A number of protesters left the area mid-morning after the group voted on whether to end the protest.

One protester, who did not want to have his name published, said they are protesting for the entire country over rising fuel costs.

“People should be following us here and helping us out as best they can. Our costs have trebled and it is not sustainable any more and cannot be done any more.”

Demonstrators have refused to say how long the protest will continue.

“Eamon Ryan and the Government is not listening to us so what choice do we have? We don’t want to be disrupting people.

“I just had to stand up with everyone else. Why should I not do it?

“I may as well be here with everyone else.”

Gardaí attempted to manage traffic and made attempts to get the protesters to move on.

Many of the vehicles carried banners with the slogan #Irishfuelprotest, with others calling for the resignation of Transport Minister Eamon Ryan.

The group behind the protest held two demonstrations in the capital before Christmas which led to significant traffic problems.

The organisation said it is made up of “truck companies struggling to stay afloat”, but is not affiliated with the official Irish Road Haulage Association.

It had announced plans for a pedestrian protest at the GPO on O’Connell Street at 9am, but it did not materialise.

The group says its protests will continue until its demands are met, and has urged participants to “come prepared for at least one week, maybe even two”.

In a Facebook post, the group said: “Dublin will be in complete lockdown and for as long as it takes until our demands are agreed upon by Government!

“We are a group of truck companies struggling to stay afloat and have come together, along with farmers, bus companies, taxis and the general public to protest as the price of being in business and the cost of living is not affordable.

“We are all in crisis.

“How are people to get to school or work? How are the elderly and disadvantaged supposed to pay for these increases?

“Not just diesel, petrol but electricity and gas. It’s atrocious the situations families are going to find themselves in, choosing between food, heat and transport.

“Our parents, grandparents and great-grandparents did not work hard all their lives and pay tax for us to live in poverty.”

The group said it wanted a peaceful protest and apologised in advance for any inconvenience.

It has called for price caps on petrol, diesel and home-heating fuel and the scrapping of the carbon tax.

People in Carlow encouraged to 'think before you pour' this Easter