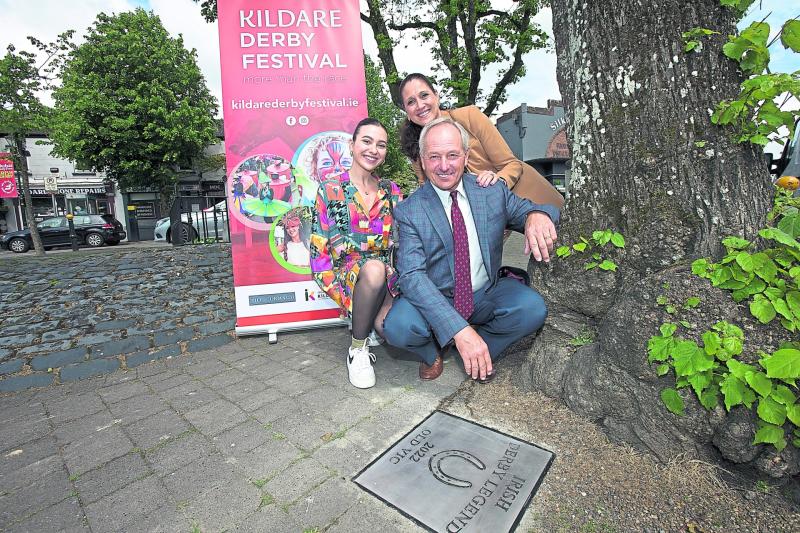 Steve Cauthen, his daughter Kelsey and wife Amy, beside a plaque in Kildare town dedicated to former Irish Derby winning horse Old Vic which he rode to victory in the 1989 Derby, Picture by Tony Gavin

The Dubai Duty Free Irish Derby was referred to by Johnny Murtagh as ‘the benchmark for three-year-olds in Europe’ at the launch of this year’s event at the Curragh Racecourse on Tuesday, June 7.

The Curragh was referred to, by all the speakers that day, as the ‘fairest’ track and one of the best in Europe.

The Derby cards are typically filled with all the best in Irish, English and French jockeys and trainers.

America, meanwhile, has its own rich history in horse racing with its own classic races, and there was tremendous excitement when an American superstar jockey came onto European shores to test his mettle over the Atlantic.
Steve Cauthen arrived in Europe with a gigantic reputation. In 1977 he was labelled the ‘six million dollar kid’ after becoming the first jockey to win over six million in a year, at just 17 years old.

The following year, with a title that could only exert pressure on young shoulders, Steve became the youngest jockey to win the US Triple Crown.

The Triple Crown consists of the Kentucky Derby, Preakness Stakes, and Belmont Stakes and winning all three is an achievement that has only been replicated twice in the 44 years since.

Steve landed back in Ireland for the first time in 30 years to commemorate his achievements — chief of which and the focus of his visit to the Curragh was his Irish Derby win on Old Vic in 1989.

The Curragh racecourse has borne the name of Old Vic for years as the famous gallops on the Curragh were named after the great horse. Old Vic’s owner Sheikh Mohammed donated the 1989 Irish Derby prizemoney to the Curragh Racecourse for their construction.

“I came over here years ago not knowing what to expect but once I was here I knew this is where I wanted to ride the rest of my career, in Europe. I loved every minute of it. It’s hard to believe it’s been 30 years since I have been,” Steve said, speaking to the Leinster Leader at the launch of this year’s Derby.

A perfect demonstration of the lack of equivalent crossover between European and Stateside racing, especially through the lens of success, is that Steve is still the only jockey to have won all three of the Kentucky, Irish and Epsom Derby races.

The significance of the Irish Derby winner Old Vic to Kildare has been commemorated as the horse was inducted into the Kildare Derby Festival Hall of Fame.

Steve recalled spending the night before his Derby win with Charlie Murless, now director of the Curragh Stud, and, upon doing so commented: “Thinking back I don’t know how I won it after that night”, followed by a chuckle.

“The course was perfect for Old Vic because she was the best horse. The Curragh is one of the best courses in Europe. The best horse usually wins and she did.”

Steve reflected on what many considered a golden age in racing as he rubbed boots with greats such as Mick Kinane and the late Lester Piggott. And he had a particular anecdote about the legendary English jockey.

“I remember one day I was watching him and he was on the home stretch side by side with an opponent when he dropped his whip. He reached across and took the other jockey’s and rode the horse home to win,” Steve said, containing his laughter.

“He was so talented but he had that determination and he was willing to do anything to win.

“He even tried to give it (the whip) back to the guy afterwards but he wasn’t pleased with that.”

Old Vic’s win, amongst many others, means that Steve Cauthen is one of the few men to create a legendary legacy on American and European soil.