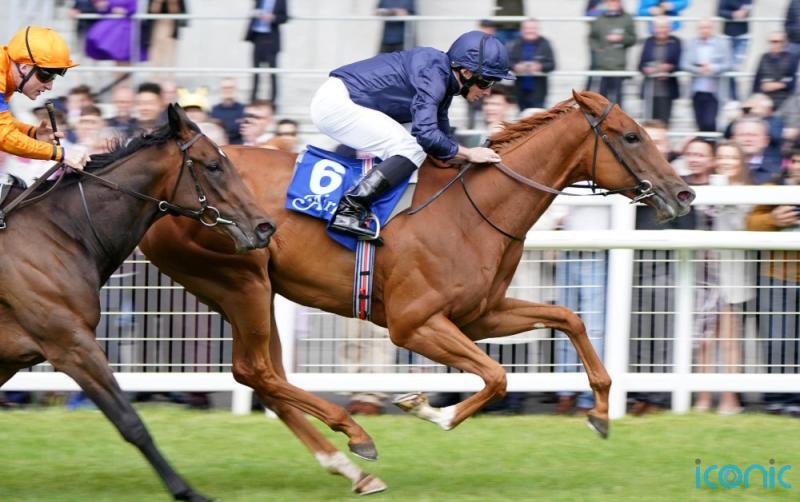 Aidan O’Brien expressed his delight with Statuette as she took her record to two from two with a determined victory for Group Two honours in the Airlie Stud Stakes at the Curragh.

So impressive first time out, the daughter of American Triple Crown hero Justify was more workmanlike on this occasion.

Sat just off the pace set by Matilda Picotte and Badb, Ryan Moore started to organise his mount over a furlong out and once the 4-6 favourite hit top gear there was little doubt about the winner, even though the margin of victory was only three-quarters of a length from 25-1 chance Badb.

“She’s a very big filly and we were only training her three-quarters ready because we had our eye on the last part of the season,” said O’Brien.

“With that type of filly if you train them too hard you wouldn’t have her at the end of the season when you want her.

“She’s 16 2 ½ (hands high), for a two-year-old filly. We were delighted, we were a little bit worried when the ground got soft that she could have got very tired but obviously just her class got her through.

“She travelled lovely and Ryan nursed her, she won lovely in the end and we were very happy.

“She has a beautiful mind, great stride and an unbelievable physique. We think the Justifys are something to look forward to.

“She’s a sister to Tenebrism but she’d carry her on her back as she’s a massive big powerful filly this one.

“She’s probably not as precocious as normal for a filly running at this time of year, but she has so much class she was able to run and do it rather than us making her do it.

“When she was able to do it we didn’t like stopping her, but at the same time we weren’t chasing her in any way at home.”

Coral and Betfair make Statuette 10-1 for the 1000 Guineas and when asked if she could be a Guineas filly, O’Brien added: “We think she is. She’s a filly with a lot of class and you’d imagine she’d have no problem getting a mile.

“The Moyglare, the Cheveley Park, all those races are there for her. Obviously we have the filly that won at Ascot (Meditate) as well. The lads will probably keep them apart.”