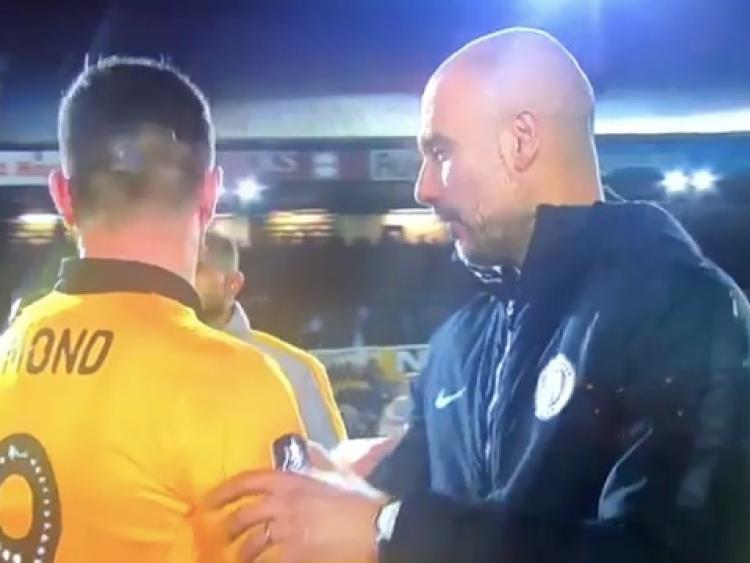 Read also: 'I thought the feeling after Leicester was good but this tops the lot,' says Pádraig Amond

The League Two outfit held their own for 45 minutes at Rodney Parade, heading into half-time at 0-0 however City would come out 4-1 victors during an entertaining second half.

Pádraig halved the deficit to make it 2-1 after 88 minutes, with the former Shamrock Rovers man looking like potentially sparking the most unlikely of comebacks.

However late goals from Phil Foden and Riyad Mahrez saw the visitors wrap up a comprehensive FA Cup win.

Pádraig's goal continued the 30-year-old's impressive record of having scored in five consecutive rounds in this year's competition — a feat which earned praise from Guardiola after full-time.

Speaking aftereards, Pádraig said: "I'm disappointed that we've lost the game and we're out of the cup, but in years to come that's going to be something I'm very proud of.

"Also, the fact that I've scored against the best team in Europe. Pep came over after the game and congratulated me that I'd scored, and when you hear that from someone like him it means a lot.

"It's been a great run, you have kids wanting to play for Newport County and maybe before that they wanted to play for Cardiff, Bristol, Swansea. The club can be very proud to inspire a new generation."