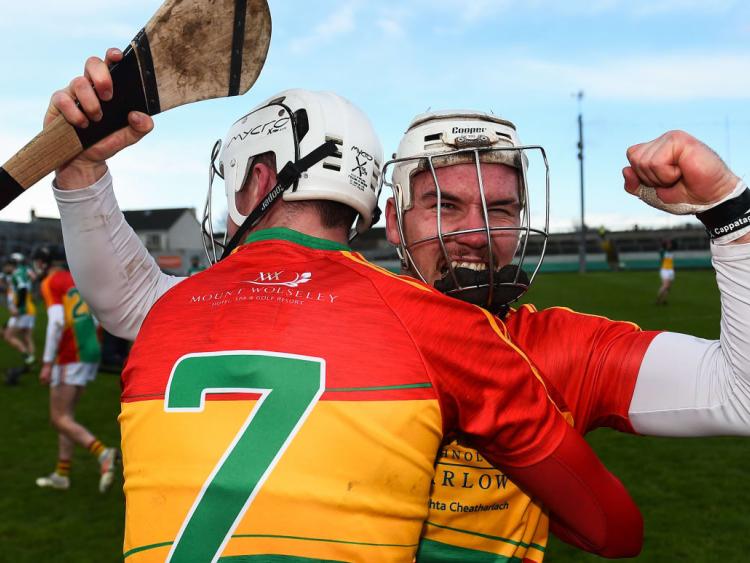 Offaly will play in Division 2A of the Allianz Hurling League next year after being blown away by 14 man Carlow in the second-half of their relegation play-off in O'Connor Park on Sunday.

Having played with the wind in the first-half, Offaly held an 11 point lead and they also had a man advantage following the sending off of Carlow's Edward Byrne with barely ten minutes elapsed.

It looked good for Offaly at that stage as they kept Carlow to three points in the first-half but the game was turned on its head within ten minutes of the restart as Carlow twice found the net when Offaly failed to deal with long balls in around the square.

Offaly managed to keep their noses in front until the 63rd minute but Carlow finished stronger and were in front when it mattered to register a famous day for them but another dark day for Offaly hurling.

It all had looked so good for Offaly in the opening exchanges as they had 1-4 on the board before Carlow opened their account. Joe Bergin contributed 1-2 of that total and Carlow were also reduced to 14 men.

The visitors eventually opened their account but Offaly continued to build their lead and were 1-11 to 0-3 ahead at the break.

Playing with the wind in the second-half, Carlow immediately set about reducing the deficit and a scrambled goal from Seamus Murphy gave them the momentum. A second from Chris Nolan ten minutes into the half reduced the gap to four.

That was soon down to one as Carlow added the next three points before Shane Dooley offered some respite for Offaly with a point for the home side.

By the hour mark, Carlow had levelled matters up at 1-13 to 2-10 and while Joe Bergin hit three points in the closing stages for Offaly, Carlow managed four in reply with what turned out top be the winning score of the game coming from John Michael Nolan.

UPDATED: McDonald's Drive Thru in Carlow has re-opened with new measures in place